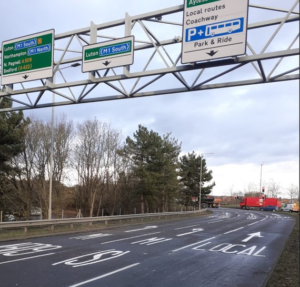 A huge makeover of the city’s grid roads continues this week as part of a long-term programme called ‘Golden Grids’ to improve the look and feel of the network.

Starting with the two main grid roads through the city, sections of both the H5 Portway and H8 Standing Way will receive intensive repairs and maintenance over the next few weeks.

The preliminary site checks were completed last month with vegetation clearance starting on 14 February. The extensive works are being coordinated between the Council’s Highways and Environment teams and will include:

The ‘Golden Grid’ works will start on the eastern side of the H5 and H8 throughout February and March and will complete in April on the western side.

These works are in addition to other improvements that began earlier in the year, repairing signs and removing overgrown vegetation on roundabouts across the grid road network.

Any road closures or diversions associated with these works are listed on one.network.