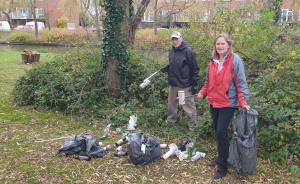 A canal towpath clean up was organised on the 20th November in a joint initiative with neighbouring Simpson and Ashland Parish Council, and Bletchley and Fenny Stratford Town Council. Two groups of volunteers from the parish were deployed. One heading south from the Chaffron Way bridge and one heading north from the Groveway Bridge to meet in the middle at Peartree Bridge. The bags of rubbish collected were then transported to a collection point in Simpson village hall for pick up by Milton Keynes Council. 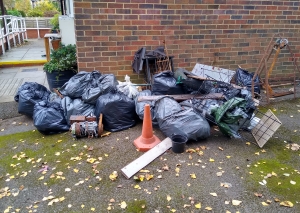 It was remarkable how much rubbish was collected in such a short space of time. It was disappointing to find so many bottles and cans, amongst much else, simply thrown into the bushes along the towpath. The picture above right shows an example at a particular blackspot near the picnic table by bridge 87 leading from Verley Close to Waterside in Peartree Bridge.